skip to main | skip to sidebar

Our new projection shows one state moving from the Obama column to the McCain Column, Nevada.

As it stands right now, we project that Obama will win the Presidency with 306 electoral votes to McCain's 232.

Breakdown of the changes:

Nevada is still basically in the toss up category, with less than a sixty percent probablity of going one way or the other, it has however moved from the Democratic to the Republican column.

Missouri, Montana and North Carolina all moved from Republican favored to likely Republican.

South Carolina and Alaska both moved from likely Republican to Republicn Favored.

Our Election Projection Homepage is here.
Posted by MHD Intelligence Unit at 1:48 PM No comments:

Here is a look at the elite eight closest Senate Races:

Virginia, Colorado and New Mexico are all such likely Democratic pickups that they are no longer on our elite eight seats to watch but they are worth a mention.

Our projection as it stands now: Democrats (Including Lieberman and Sanders) 56 Republicans 44. We have moved the Mississippi Special into the Leans Republican category. No state since 1966 has voted to elect Senator's of different parties during the same election. We are surprised by the weakness of the Democratic incumbent in Louisiana. It appears that her vote in against the development of oil shale as a favor to Colorado Senator Ken Salazar (D) is hurting her.

This You Tube Video put up by the SRCC08 has gotten a lot of media attention in Colorado and Nationally.

Mary Landrieu (D) is certainly paying a heavy political price for her vote against expanding domestic oil production at the behest of Senator Salazar.

Mary Landrieu Voted Against Expanding Domestic Oil Production At The Request Of Senator Ken Salazar (D-C0), Despite Saying It Was Against Her General Philosophy. “‘Sen. Salazar asked me to vote no. I did so at his request,’ Landrieu said. ‘But I also told him because it's contrary to my normal philosophy that I’m going to reserve the right to work with him…’” (M.E. Sprengelmeyer, “Oil shale hits roadblock in Senate,” The Denver Post, 5/15/08)

Landrieu Was The Deciding Vote: “The fate of the amendment was sealed when Sen. Mary Landrieu, D-La., announced that, although she would support such a measure on the floor, she had agreed to oppose the amendment in committee at the behest of Democratic colleagues.” (Terry Kivlan, “Senate Panel Passes $193 Billion War Supplemental Bill,” National Journal’s CongressDaily, 5/16/08)”

Current Senate Make Up: D-51 R-49 including Sanders and Lieberman as Democrats.

Projected Senate Make Up: D-56 R-44 including Sanders and Lieberman as Democrats.
Posted by MHD Intelligence Unit at 10:28 PM No comments:

Toss Up Democrat Held 4
Posted by MHD Intelligence Unit at 1:54 AM No comments:

Toss Up (4): Republican; Florida and Indiana. Democrat; Nevada and Virginia.

Total Democratic States: 25 States and DC with 311 Electoral Votes.
Posted by MHD Intelligence Unit at 1:33 AM No comments:

Here are what some of the other projection sites say: 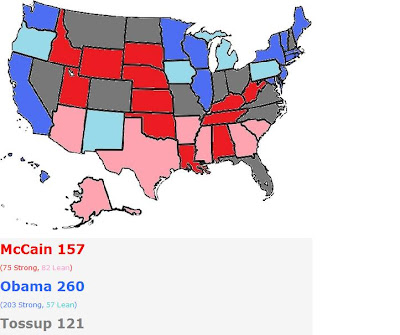 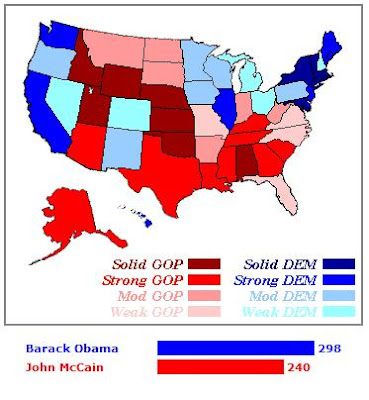 3 Blue Dudes has a great Election Projection Project Data Base where they have links to every projection website that they have found. If your really into politics, this website is nirvana for you. You can find it by clicking here.

Our Election Projection Homepage is here.
Posted by MHD Intelligence Unit at 12:12 PM No comments:

Detailed analysis will be up shortly along with a map of the State House Districts.
Posted by MHD Intelligence Unit at 12:31 AM No comments: